Today is Youth Day. A day when South Africa stops and remembers the role that youth played in the struggle against apartheid, in particularly the Soweto Uprising of 16 June 1976, in which 13-year-old Hector Pieterson was one of the first victims. Also on this day, the country celebrates the role that youth play today in South Africa. I think it is cool that the country has set aside a special day to celebrate its young people.

I’m often asked what similarities and differences I see in the state of young people in South Africa compared to the U.S. Honestly, in a way, it is hard to compare. Many times it comes down to class, as it does in the U.S. The biggest difference I see is that the young people of South Africa face so many difficult situations, some near impossible, such as being the head of their families because of their parents’ death, than the youth in America; and unlike American youth, they don’t have the resources to help them cope. For example, in the States, there are so many resources—counselors, therapists, non-profits, churches, social warefare programs, so forth—available for young people to access, whereas here, there is a huge lack of resources. Most of the schools, such as the one in which I recently worked, don’t have a single counselor on staff. The lack of resources is one of the hardships of a developing country, such as South Africa.

And South Africa, like the U.S., tends to do a lot of complaining about its young people—the lack of respect, laziness, failure to commit, having a sense of entitlement. What’s new? Doesn’t each generation complain about the upcoming one? My generation was given the infamous misnomer of “Generation X.” What was fair about that?

But I don’t want to end on a sour note. I think there is a lot of good to celebrate in the young people of South Africa, as in the States. If I think about the young people I have had the privilege to get to know in South Africa, I feel encouraged, seeing a bright future for this country. I feel particularly blessed to have had the opportunity to lead a Youth Alpha course at a local high school. For each session, we had an average of 42 students. These students were committed, engaged, inquisitive, bright, compassionate, and fun-loving. I truly believe that many of them will go on and do great things for their local communities and for their country; I think God has a special plan for many of them–well truly, he has a special plan for all of them. I just had the sense that I was in the presence of some very special young people, and it was a huge gift to me.

So today, whether if you live in South Africa or in the States (or in another country), be sure to tell at least one young person how special he or she is, encourage that young person, let him or her know that you believe in him or her. One simple but sincere word of encouragement can go a long way.

One of the hardest things for me in my new life and ministry is dealing with all the hello’s and good-bye’s. The hello’s are great. The good-bye’s are hard.

Picking up my mom and sister at the airport= wonderful, exciting, beautiful, priceless
Taking them back to the airport= tearful, sad, a feeling of loss

Running the Youth Alpha course at a local high school= connection, bonding, joy, relationship
End of the Alpha course=sadness, loss, wondering if I would see most of the students again 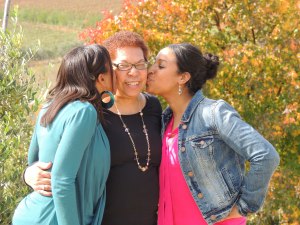 My happiest hello’s are when I see family members again—either on this side of the world or in the States. I’m so grateful for the two weeks that my mom and sister got to spend with me in Cape Town. I loved every minute of our time together, showing them around and giving them a taste of my world, especially since it was my sister’s first trip here.

I love meeting people through the trainings and programmes with which I am involved. It’s amazing how a sense of community can form within three days or six weeks, but these projects are always short-term; and we have to move on. And so we do, waiting for the next hello.