I’m waffling over whether to click “publish” or not. Dare I—or not? I’m a bit embarrassed to publish this post; but as I said from the beginning, my blog will reflect my experiences of living cross-culturally. I won’t gloss over difficult situations or paint things in a rose-colored lens. Yet what I have written about is very first world. Even if my American and South African friends can’t relate, I think they will respect my honesty; and I know they will love me all the same, so here goes…

Ever since I arrived in Cape Town, I have been borrowing my boss’s spare mobile phone. It was time for me to get my own phone, and I had my heart set on the iPhone 5. Earlier this year, a local carrier had a good deal for the iPhone 5; but I hadn’t been in the country long enough to have all the required paperwork to get the phone on contract. Months later, when I did have the paperwork, the deal had ended and the iPhone 5 was way out of my budget. Ok. I thought. I’ll get the iPhone 4s. Well, it was still out of my budget, but I tried my best to justify it: It will sync with my laptop and tablet. I love the iPhone; I’m familiar with it. I can use several apps to stay in touch with my family. I need it to stay in touch with my family.

I spent several weeks researching all types of smart phones and looking at several local carriers, trying to find the best deal. I crunched numbers, trying to squeeze the iPhone 4s in my budget. I agonised over whether or not to purchase the phone or to buy a certain android phone, which was in my budget. (Gasp—I can’t go droid!) I was fretting about what to do. Finally, I accepted that I couldn’t afford the iPhone, and I began to pout. A week ago, when I was having a pouty conversation with God, I felt God say to me, Get a grip. You are whining over stepping down from a Mercedes to a BMW, whereas most people are still riding along in a horse and buggy.

Ouch, God. That hurt. But God got my attention. Over the next few days, I did a lot of soul searching. I realized, as ridiculous as it sounds, I had a lot of my identity tied up in Apple. I love Macs, and I am an “Apple person;” but somewhere along the way, my admiration for this product line became a way in which I defined myself and that wasn’t good.

Wrestling with my phone dilemma brought me face-to-face with the core of my problem; in many respects, I have been trying to hold on to the lifestyle I had in the States—and that’s impossible. South Africa is not the USA, and I make a fraction of what I earned at my old job in the States. And even if I could create a mini-USA lifestyle bubble for myself, it wouldn’t be the right thing to do, especially as a missionary.

But it’s hard. I feel the tension of going from a first-world country to a developing one. At times the tension is in the background; other times, it is at the forefront–but the tension is always there. I guess it is a part of living cross-culturally. It’s a challenge to know what to hold on to and what to let go. I’m embarrassed that it was so difficult for me to let go of something so trivial as a phone, but it was hard. On the flipside, some things are worth holding on to. Recently, I have come to terms that I need to join a gym, as it isn’t safe for me to go on walks by myself and as public tennis courts are non-existence. Physical health is vital to my emotional, mental, and spiritual health; and I am feeling the lack of exercise from which my body is suffering. This is the most unfit I have been in my adult life. Being fit is something worth holding on to; but the phone, I had to let go—and that’s OK. Steve Jobs would understand. 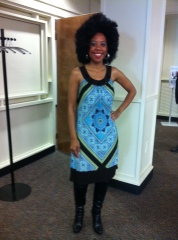 I don’t really celebrate Halloween; but I wanted to dress up this year, so I did. When a friend invited me to attend the Vigil of All Saints at the motherhouse of the Dominican Sisters of Saint Cecilia, I wanted to go; so I went, although that meant canceling a previous commitment.

I’m so glad I went to the vigil. After getting over my initial surprise about how young the nuns were (most looked my age or younger) and over the newness of the liturgy, I settled into the service and began to listen to what was being spoken and sung. Two things really struck me. One was the priest’s homily, in which he talked about only one thing being needed in our lives—realizing and accepting that God gave his son for us and responding in love. The other thing that struck me was the sisters’ chanting of the litany of the saints, which for me has shed new light on the meaning of Hebrews 12:1.

Today is All Saints’ Day, and I tend to think of this holy day in three ways—remembering the saints of old, acknowledging the everyday saints of today, and remembering my friends and family members who have died. I never really think of the saints (whether extraordinary or ordinary) who have died as being living saints, but I find it interesting that the writer of Hebrews uses the present tense: “We are surrounded by so great a cloud of witnesses” (Hebrews 12:1a, NRSV). The saints who have gone before us are a living and breathing cloud of witnesses.

As I continue to think about this scripture, I’m challenged to think about my identity. Over the past few months, I have been struggling consciously and subconsciously about my identity. In two weeks, I will be leaving my job at The Upper Room. I will no longer be able to refer to myself as an editor. I fought hard not to tie up my identity with my line of work, but I did. That’s what we do as Americans. But the other night, when a friend was helping me sort out my clothes, I realized that I had also tied up my identity in my clothes, my shoes, my books, and all manner of stuff. As I’m scaling down my material possessions, stripping down to the bare necessities, I believe God is also stripping down the trappings of my soul, the clutter of my heart.

Who am I, truly? Beyond all the clutter, trappings, and labels, I think I would find God’s beloved daughter and a member of this great cloud of witnesses of ordinary and extraordinary saints.  As the hymn goes, “I sing the song of the saints of God . . . and I mean to be one too.”

*This post is dedicated to two friends and two saints in my life, Stuart and Gina.

No, this isn’t a joke, but it ought to be. And if I were clever enough, it would be.

As I wrote in my last blog post, the past few weeks have been difficult; but I believe they have been full of growth. I don’t think I’ll realize how much I have grown in faith until months down the road. God has used a Catholic nun, an Episcopal priest, and a gospel singer to help me refocus on him.

I have always been a huge fan of Mother Teresa, but I have never read any of her books until yesterday. I was verifying a quotation for work and ran across a bunch of Mother Teresa’s sayings in the book A Simple Path. I decided to download it. This compilation of Mother Teresa’s writings has reminded me of my (our) purpose in life—to love God and to love and serve others in Christ’s love. Here are some of my favorite quotations from the book:

“God doesn’t require us to succeed. He only requires that you try.”

“Never worry about numbers. Help one person at a time and always start with the person nearest you.”

“Do not think that love in order to be genuine has to be extraordinary. What we need is to love without getting tired. Be faithful in small things because it is in them that your strength lies.”

Episcopal Priest
Earlier this summer, my mom reminded me of the importance of staying focus and of being mindful of distractions. I have stayed focus on my missionary preparation, but I did lose focus about my identity in Christ. The Ephesians sermon series that one of my priests, Fr. Gilliam Malone, is preaching has re-centered me, reminding me that I’m God’s daughter and that I don’t have to earn God’s love. I realized that I expect more of myself than God does. I expect myself to be perfect; God expects me to be faithful. (You can listen to these sermons via your media player at http://www.stgeorgesnashville.org/Media/Sermons. Click on “Ephesians 1: Adoption in Him” and “Ephesians 2: The Necessity of Jesus’ Death.” I haven’t listened to the third installment preached by The Reverend Sarah Kerr, but I know it will be good!)

Gospel Singer
During the hard drive back from Memphis (see my last blog post, “Sacred”), I listened to Marvin Sapp’s album I Win. The songs are full of redemption and hope. I really resonated with the song “Deeper,” in which Sapp sings about how God calls us out of our comfort zone to go deeper with him. You can download the song at iTunes or listen to it for free below via Spotify. (If you don’t have Spotify, it’s free to download; and it’s great!)

I have always struggled with this passage; it makes me feel uncomfortable. God wants us to love our families, right? I love my family more than any people in the world. And who wants to take up a cross, to face known or unknown persecution? Perhaps it is verse 39 that I find most troubling: Aren’t we supposed to find and embrace life? If we lose our life for Christ, we will find it? What does that mean? Help!

Over the years, I have come to a deeper understanding of Matthew 10:37-39. At the core, I think Jesus is talking about priorities. Whom do we love more–our families or him? As a matter of fact, it isn’t a tradeoff. The more we love Christ, the more we love our families and others. Everything falls into order.

As I prepare to move to South Africa as a cross-cultural Christian worker, I sometimes wonder if I will lose my identity. Whom will I be eighteen months from now? two years from now? three years from now? Will I even recognize myself?

For the longest time, I thought Matthew 10:39 referred to physical death: If we were persecuted and died for Christ, we would find life. But I don’t think that is the main thing Jesus is talking about. I think he is talking about giving up our life—life as we know it—for his sake, to do what he has called us to do. This new understanding of the scripture gives me hope and encouragement. As I give up my old way of life, I think I will find myself. I think I will be more fully me, the Yolanda Nicole Corlew whom God created me to be. And that makes me excited.

Just  for fun–me over the years: