A month ago, the International Anglicans Ablaze Conference was in full swing. It’s hard to believe that this big conference, for which we have been planning for so long, is now over.

The conference is the largest gathering of Anglicans in the Anglican Church of Southern Africa. We had 1500 delegates who came from inside and outside the Province. They came from South Africa, Namibia, Lesotho, Zimbabwe, Malawi, Botswana, Mozambique, the U.S. and several other countries. Wayne and I, with invaluable help from a great team of youth leaders, oversaw the youth track of the conference. We had 350 young people in attendance, and there was standing room only in the youth venue. The young people’s response to the conference was amazing; we kept hearing young people say that this conference really dealt with relevant issues, things they face now. For example, we had topics on sex, gangsterism and drugs besides the traditional topics of prayer, discipleship and leadership. A lot of our youth live in drug-infested environments and gang-riddled areas. The couple who talked about sex gave the best talk on sex that I have ever heard and really created a safe environment for the young people to ask difficult questions. I think God really healed a lot of brokenness during that time, as many young people felt comfortable talking about some of their painful experiences and came up for special prayer.

The Anglican Communion News Service made a couple of videos about the conference that we would like to share with you. We hope you will enjoy them.

Recently, I got to experience two celebrations with two groups of special young people—the opening of the school hall at Heathfield High and confirmation at my Cape Town parish church, All Saints Plumstead.

It was such a privilege and a joy to be at the school hall opening because I feel such a connection to that school, due to my 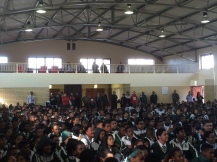 relationship with the learners and teachers because of the Alpha course we ran last year and are currently running now. Plus, I have friends and family members who attended this school. At the ceremony, I got to sit with the teachers, which was a real treat; and I kept thinking of my dad, who taught school for 36 years. I truly believe for many children, after their parents and grandparents, teachers play the most important role in their lives. That was certainly the case in my life.

On Sunday, we had eight young people to get confirmed at my church. I know these young people quite well because my husband served as their youth leader for several years. It was truly special to witness them take this commitment, this important step in their faith formation. I know this commitment meant something to them, that they will strive to serve the Lord with all their heart; and that truly makes me happy.

When I think about the young people who were just confirmed and about the youth who are taking the Alpha course at Heathfield High, I get excited. In the States and in South Africa (and probably in every country in the world), many adults like to complain about young people. But when I look at the youth in both my countries, I see hope. Young people rise to the level of expectations, and we adults often have low expectations of them, which is a dis-service to them. We can do better than that. Let’s have great expectations for our youth; they deserve nothing less.

Today is Youth Day. A day when South Africa stops and remembers the role that youth played in the struggle against apartheid, in particularly the Soweto Uprising of 16 June 1976, in which 13-year-old Hector Pieterson was one of the first victims. Also on this day, the country celebrates the role that youth play today in South Africa. I think it is cool that the country has set aside a special day to celebrate its young people.

I’m often asked what similarities and differences I see in the state of young people in South Africa compared to the U.S. Honestly, in a way, it is hard to compare. Many times it comes down to class, as it does in the U.S. The biggest difference I see is that the young people of South Africa face so many difficult situations, some near impossible, such as being the head of their families because of their parents’ death, than the youth in America; and unlike American youth, they don’t have the resources to help them cope. For example, in the States, there are so many resources—counselors, therapists, non-profits, churches, social warefare programs, so forth—available for young people to access, whereas here, there is a huge lack of resources. Most of the schools, such as the one in which I recently worked, don’t have a single counselor on staff. The lack of resources is one of the hardships of a developing country, such as South Africa.

And South Africa, like the U.S., tends to do a lot of complaining about its young people—the lack of respect, laziness, failure to commit, having a sense of entitlement. What’s new? Doesn’t each generation complain about the upcoming one? My generation was given the infamous misnomer of “Generation X.” What was fair about that?

But I don’t want to end on a sour note. I think there is a lot of good to celebrate in the young people of South Africa, as in the States. If I think about the young people I have had the privilege to get to know in South Africa, I feel encouraged, seeing a bright future for this country. I feel particularly blessed to have had the opportunity to lead a Youth Alpha course at a local high school. For each session, we had an average of 42 students. These students were committed, engaged, inquisitive, bright, compassionate, and fun-loving. I truly believe that many of them will go on and do great things for their local communities and for their country; I think God has a special plan for many of them–well truly, he has a special plan for all of them. I just had the sense that I was in the presence of some very special young people, and it was a huge gift to me.

So today, whether if you live in South Africa or in the States (or in another country), be sure to tell at least one young person how special he or she is, encourage that young person, let him or her know that you believe in him or her. One simple but sincere word of encouragement can go a long way.