As I have mentioned several times, my books are going to be the hardest thing for me to part with; but upon a quick glance-through, there are some I definitely plan to leave behind.

Top-10 Books I Won’t Be Taking with Me 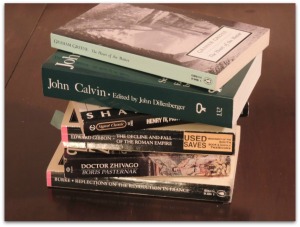 10. Moby Dick by Herman Meville (I never liked this book. I don’t know why.)

9. Henry IV, Part One (only because it has a big rip through the cover)

8. Doctor Zhivago by Boris Pasternak (I have two copies. I’ll be taking the hardback with me. Had you fooled, right? Doctor Zhivago is one of my top-three favorite books of all times.)

7. Ernest Hemingway’s short story “In Our Time” (I’ll be taking the complete Hemingway short stories with me.)

6. The Heart of the Matter by Graham Greene (I didn’t like it.)

5. Decline and Fall of the Roman Empire by Edward Gibbon (It’s full of helpful information but dry and boring as dust. Plus, it has no chapters!)

4. Reflections on the Revolution in France by Edmund Burke (same as above)

3. The Stuart Constitution (I was never into parliamentary history.)

2. Tennessee: A University Portrait (Why on earth do I have this book in the first place? Someone please tell me.)

1. John Calvin: Selections from His Writings (Oh, my, the writings of Calvin. Enough said.)